the new GH under GW time

GH-Jokers :: All GH, All The Time :: GH Discussion

the new GH under GW time

Hi all my 1st topic lol hope its good

OK so we have GW as GH's lead writer for over a month,the ratings are very jumpy so I think its interesting to have convo about GH now..

for 1 I think GH has been improved heavily,we have more than just 3 characters talking w/4 characters and the same scenes again&Again..
we see more characters interaction,we see more vets,this past month we saw so much of Edward Monica Tracy,not just as Luke's wife but as her own character.Edward&Monica have a SL not just side kick but we see them,their POV their wishes...
we have woman POV!!! not just talking about the men but they have wishes they have POV,they stand on their own..

WE have lots of GH action w/Robin as CoS,Matt Patrick/Steve/Piff Liz Im enjoying it even though I think Robin should not be CoS!!!! the fights between the brothers in front of Jason's family was disgrace!!!! we had to have Sam Shutting Matt down when it should have been ROBIN,But Im enjoying this GH stuff/good medical drama!!!!and I love to see Scrubs dealing w/it...

I love Jason's accident SL I love that GW is using the Q's factor in this SL,they even keep mentioning that The Q's are Jason;s family and not Sonny&Carly,something they never done,when Carly called GH no one was willing to give her info the same w/Sonny..
I loved Seeing Monica taking stand regard Jason's treatment,her VS Sam was really good stuff&In the end both women acted as adults..
I love the dream episode when we had chance to see Alan&the Q's back...

the only think that bothers me is will Jason be different or its back to normal??if its back to normal maybe the point of this SL was closer to Liz/Carly and start new w/the Q's?? something I didn't understand..

Im not found of Lucky drugs SL,1 is because we see Lucky always sad,I think JJ is wonderful actor but watching Lucky sad and sad is getting Annoying!!!if they go LnL2 road they need a change the SL FAST!!!

Im trying to understand the all Sonny thing.. he didn't take his drugs for 3-4 months so we can understand that is why he is acting like this?? BUT if they are telling us that Sonny is sick why no one is helping him?? Robin knew that Sonny is off his meds but she is down on him as the rest of them?? we had Dante mocking Sonny illness and that was wrong,what message it brings???
Im getting tired of seeing everyone turning their back at Sonny,I loved Alexis though because she was mad w/him,and he deserve it 1000% But still not really harsh w/him..
Carly is another thing I consider myself Carly fan But damn its hard to support her these days,she is always screaming at Sonny,I think the past few weeks I had every day Carly screaming,its too Much Carly (in the episode count for August LW is the highest!) TOO MUCH and I love LW but Im sick of her screaming...

if SOnny is written to fall and then get up w/Kate I find it bad,Sonny needs medical help no great romance SL JMO Im giving GW chance and Kate chance but this is not wining me over..

I think the mob especially Anthony is over used!!I like Anthony But we have him doing drugs on this bakery,shifting drugs in GH,drugging Lucky,Killing SHivone,ELQ stuff w/Sky&Tracy TOO MUCH!!! he is not even funny anymore...

what You think??? hope I did good

Re: the new GH under GW time

I have loved having GW so far, but everything isn't perfect.

Lucky and the drugs (really, he takes a couple of pills and he's strung out like there's no tomorrow?), Spinelli/Jackal (Granted Guza da luza started that), nuKate, Dante getting shot AGAIN, etc.

However, I have loved seeing Quartermaine life again! The Monica daydream with Alan being alive brought tears to my eyes! If anyone has been watching AMC, Dr. David Hayward has been bringing people back from the dead left and right with his Project Orpheus. Garin, please tell me he has had Alan and Georgie stashed away waiting for them to be healthy enough to go back to normal life! I have also loved crAZy AZ, Skye, and Tracy with the past references to Tracy's involvement with the mob. If they aren't going to get rid of the mob, they should at least intertwine it with other people! I love that instead of making up something ridiculous or simply ignoring the Q's, they are actually utilizing character history and bringing it back!

My Sam finally got her, mind you HER dream wedding! Not Maxie's, not Kristina's or Molly's, but her dream wedding. I think I may finally be over being angry with Jason (especially since the sexy Greg Vaughan isn't Lucky anymore), so I am really happy that they got married. Hopefully, Garin will continue to give Sam her own point of view instead of just being a yes man for Jason. Anyway, the wedding at the Chinese restaurant was beautiful and perfect for them. I loved that their wedding rings belonged to Alan and Lila, and I loved the meaning behind it. I think Maxie was too funny trying to plan everything with nothing working out. I don't think it's her fault; she's planned other weddings that went off without a hitch; but her plans simply weren't meant to be. She really reminded me of my best friend, who looks eerily like Kirsten Storms, when she was helping me plan my wedding! She kept making plans, and trying so hard to do everything she could but she drove me slightly crazy! I love her and couldn't have made it to that day without her, but that doesn't mean anything went perfectly for us either! Granted, I did NOT end up getting married in a Chinese restaurant and I did NOT have a psycho steal my wedding dress, so I guess it turned out okay!

IMO, the positives outweigh the negatives! 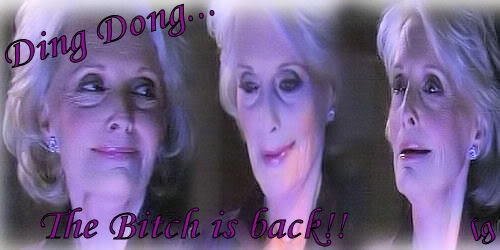 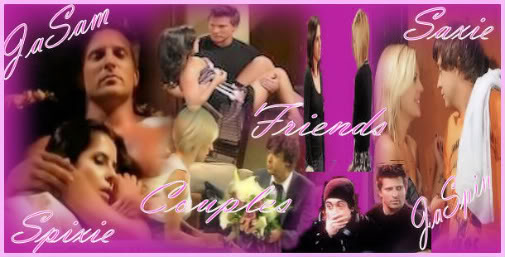 Thank you Amy for the awesome banners!

GH-Jokers :: All GH, All The Time :: GH Discussion